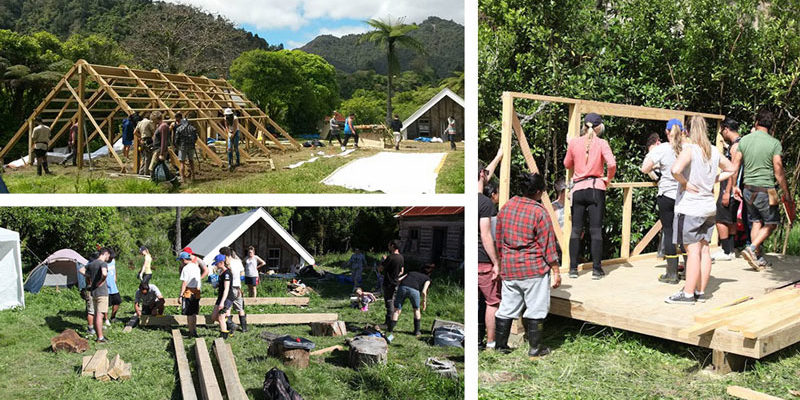 The design, fabrication and assembly of the Te Pooti Marae dining hall structure has been the most rewarding project I’ve been involved in during my time as a student at Unitec. Thanks to the JNL product sponsorship our design for a flat pack Whare became reality.

Early on in the design process it was determined that materials for the dining structure of 81 square meters would either need to be found onsite or would need to be very lightweight. The reason being that all materials needed to be transported across the Whanganui River via jet boat, carried up the river bank, and then walked another several hundred meters into the Marae. Construction time was another big consideration.

We knew that we would have only five days on site for building. The time factor ruled out the idea of finding and milling timber onsite and led us down the route of a digitally fabricated lightweight structure. After some initial trialing of plywood I beams we chose JNL structural plywood because of its high strength to weight ratio. We found that by constructing box beams and I beams from two layers of 12mm plywood rather than using standard timber framing we could reduce the weight of the structure dramatically.

The other benefit of using a good quality sheet product meant that we could digitally fabricate every single component with Unitecs CNC router before leaving for Te Pooti. Thankfully the plywood we received from JNL was extremely stable and flat which meant we could set the CNC router at the fastest setting and the entire structure (40 sheets) was cut out in two days.

“The structure took approximately 6-8 of us to assemble and erect. This was done with the aid of two A3 sheets of simple instructions. Because everything had been fabricated precisely off site all that was needed to do onsite was the screwing, gluing and assembling of the ridge beam, posts and portal frames.”

“I’d like to personally thank Juken New Zealand for your contribution to this project. None of this would have been possible without the product sponsorship. Our flat pack Whare would have been nothing more than an idea on paper.”

I’d like to personally thank JNL for your contribution to this project. As a student it’s very rare to have the opportunity to design and build a project of this scale. And reflecting on the project, most of the significant learning happened once we started to build, and continued right up to the very end when were discussing how we could improve and tweak little details to improve the design. None of this would have been possible without the product sponsorship. Our flat pack Whare would have been nothing more than an idea on paper.